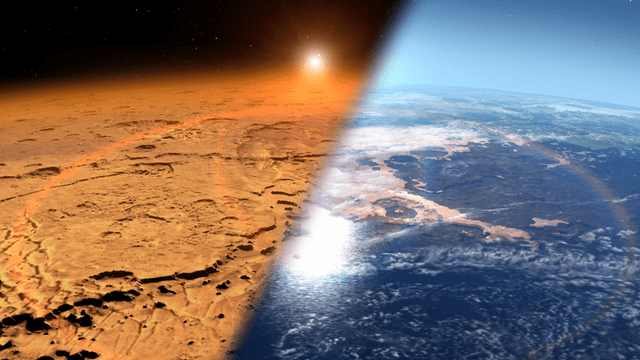 The red planet is the fourth planet from the sun, with a radius of 2,106 miles; smaller than earth, but still a great danger to anyone or anything that is unprepared. Cracked dense soil. Seemingly fiery air. A barren dessert. Inhospitable from drought, overcome by heat. Lacking in Earthlike Oxygen Isotopes, surrounded by a thin atmosphere of carbon dioxide, nitrogen, and argon. Seen a red from a telescope, glowing an orange hue in the dark starry night sky from our home plant. It's Mars. But it wasn't always this way...

Recent evidence, has proved that about 4.5 billion years ago, when the dinosaurs were still roaming Earth, Mars could have been mistaken as a smaller Earth. CRAZY! Mars was at one point covered in water...that was not all frozen. There was flowing water on what is now an inhospitable dessert! And up until the last estimated 4.12 to 4.14 billion years Mars had a planet wide magnetic field just like Earth, however, it is still unknown what shut down this magnetic field. Could it have been the cooling of Mars' core?

At one point the red planet had two small moons: Deimos and Phobos, which likely formed from debris dispersed by Mars after in impact billions, if not trillions of years ago. Both of these moons show numerous signs of impact. Scientists concluded that signification of these impacts and the thousands of craters on Mars prove that there was impact to Mars from space debris. From this conclusion the theory that Mars lost its magnetic field upon large impact in its south pole, spurring the downward slide of the potential for any life or life supporting thing on Mars until the planet was deemed inhospitable.

Even now the Martian atmosphere continues to thin, trapping less heat, still not guarding against the extreme temperatures. Leaving the water solid, frozen to ice, leaving the surface of the planet a dusty, dry, moisture deprived place forever. Forever? Maybe not...

A recent study at Harvard University introduces the potential use of Aerogel to restore the surface of Mars back to its state billions of years ago. Aerogel is a Styrofoam like solid. Aerogel is usually made of Silica which is found in glass. This material is known to be an amazing insulator that is extremely lightweight. It is also translucent, which will allow light to pass through, while still blocking the harmful radiation that is emitted by UV light, which in turn mimics the greenhouse effect found here on Earth.

In the experiment, it was found that the insulation from the Silica Aerogel raised the temperature of the simulated surface set to represent the Martian crust enough to melt ice and protect from ultraviolet radiation. The potential of liquid water on the surface of Mars will theoretically allow for the revitalization of the Martian surface and soil. Revitalized soil will make it possible to grow crops on Mars, therefore, bringing humanity one step closer to exploring Mars, and potentially inhabiting the Red Planet.