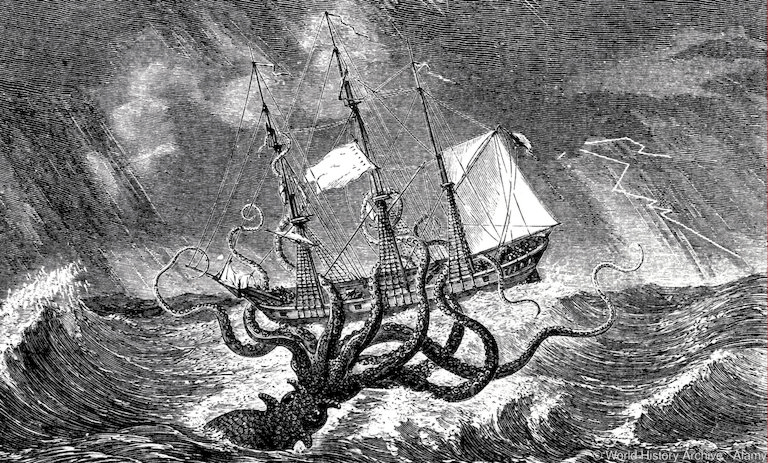 The Kraken of the Reef

You're on a boat trying to move past the massive waves, the storm grows the waves as the rain fuels the size of the wave you hear a voice coming from the distance “STEADY” as they hose up a cage filled with crustaceans as they pour them out into the bin, another voice appears saying we need to move the ship before the waves swallow it. You run up the stairs catching yourself every time you slip from the rain and the rocking of the boat you grab the anchor off the side as 3 other men join you as pull with all your strength and lift it up its off so reach for the wheel turning it to move with the waves saving the ship, the boat moves barely a couple of feet from where it was than stop at an instant, you look confused did the anchor fall you look left to you it was there, but than one more thing catches your eyes, the waves are gone you look over the edge to find something that surprises you the ship it's above the waves being held up and then out of the ocean arrives a beast of massive size the men panic as it growls being louder than thunder itself and in a bolt of lightning its faces was seen a giant squid the captain preys to lord of the sea. You run to the life boat and get ready to dock off as you watch the other men run to it but in the second bolt of light, the ship was torn in half dropping you in the water you watch as the monster goes back to sea taking the lives of all the crew, the wave stop being no longer as massive, the moon sky being the only light you find, you were lost in the sea for 2 days till you land when the people find you they seem surprised to see you all speaking a different language until one man walks forward saying if you were all right you gasp out breath telling about the monster, the crew, and the journey but then man stops you and says “the monster come to take the lives of those it finds in its home, your crew is gone and now you stuck for now” you ask if they had a ship you could use to warn the mainland “yes we do but that won’t be possible” you look with confusion “I've been here 10 years, I was like you, when you sail out there the monster will be there and if it's not their then then the waves alone would be enough to finish you so stay away from the deep sea from the monster shall be wait for thee”

You’ve probably heard the tale of the kraken a giant squid that horrified sailors for years and still for today but what most people don't know is whether this massive squid was real, or a myth scattered by time being just a folk tale to warn the past generation to never adventure to close to the sea or than the kraken would be waiting their ready to drag you into the cold in brace of the sea. The kraken is supposed to be a giant squid with the size and strength to drag sailor's ships into the sea. This monster was said to be somewhere around 100 feet big all the up to 1.5 miles across being told and said about in several stories such as (Homer’s epic poem, The Odyssey, Hydra of Hercules fame and more). It was said that where the kraken would roam there would be a pile of treasure covered by debris gathered by the ships it drags into its lair.