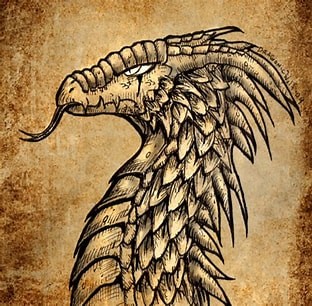 Your spelunking in a cave enjoying the nice natural colors and textures of the rock walls after walking for bit you realized you lost the people you went with (I know it sounds impossible just go with it) out of nowhere you feel a breeze of wind so you follow it hoping to see an exit, but what you find is even rarer a pile of gold and treasure is their but there is no exit so your confused, but then you look further in the pile of gold and you find a fire breathing dragon sleeping your mind running wild having so many questions how has no one found the dragon? You look over your choices and decided the right move you walk backwards making sure to make sure to cause no sound, your almost home safe but you step on a pile of short pebbles making enough noise to wake the beast up, it walk towards opening its mouth getting ready to blow red flames but its eye aren’t pointed to you but your ring of gold so with no last choice you roll the ring to the dragon the dragon stops its flames grabbing the ring and heading back to its lair you run back to find the exit with people you came with, when you said what happened to you they look at you as if you were crazy but when they went in to look for the so called dragon it was gone at least you came back with your life but not your wedding ring good luck explaining that.

If you were ever a kid you’ve probably heard the tale or these legendary beasts the dragons were large flying lizards said to breath fire. The nature of dragons is said to be evil but as time goes on the description of dragons has changed from being cruel and harsh creatures to than powerful and benevolent creatures capable of warding off evil. These massive creatures lived in a lair typically a cave there they guard their treasure being of anything of value gold, jewels, even knowledge. Their original origin for appearing was during the Medieval period in Europe. These mighty creatures were backed upon throughout the years being said and told by several parts of the globe of both on how they helped and hurt humanity but against, there is no picture of these giants, no remains, and no sign of DNA so were they ever real or being another story told and believed by the progression of time or maybe not?