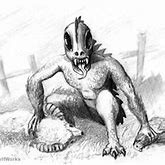 You’ve probably heard the tale of the hydra a dragon with the ability to regrow twice the amount lost even being able to live with its head cut off or the kraken a giant squid like monster said to be the size of a cruise ship terrorizing the seas taking anything that moves in its sight to deep in braces of the sea. These stories these legends our what we called myths tales that have no proof to be believed to be true but say to inspire and spark the minds of the future generation through these stories we learn about what the old world was like and how they believe to overcome these destructive creatures so now is the question, how often is a myth to be true or to be false or better yet is just a story enough to make you check your surroundings after you hear of these tales?

The legend of El Chupacabra

It’s night the moon is full and the only light you have is the lantern in your hand; you walk around in the night leading a group of sheep to their pens after shearing their wools you find the barn, placing all the sheep in their pens locking the gate with 2 and closing all the staples. You go back to your house as you walk you hear the corn field rustle a bit ignoring it thinking it's most likely a flick of the wind. You find your home you lock your door feeling the same as any other normal day you go to sleep, you wake you could see the day light appear out your window you go to change your clothing, than eat breakfast, and brush your teeth nothing new same old routine. Then you got to the barn getting ready to take the sheep to the field to eat some grass you walk to the entrance but then you stop at first sight of the gate's doors, the locks are broken off the door it was clawed open you freeze on thought of what it could have been. You know if you run the animals may still be alive but if you leave to get help their death is inevitable, so you walk in. Already to run in a moment's notices but what you see shocks you to your very core the sheep were all dead only lifeless bodies remained all drained of blood you call the animal control line in hope of an explanation but when they see the carnage, their faces are blank. The only thing left to do is to get rid of the bodies but then another question pops in your head what if you took an hour off yesterday or what if you did not leave a minute earlier would you still walk back home or would you be joining the sheep in the clouds and one last thing pops up is whether it was gone or was it waiting in the corn field for you leave and what if you did not lock yourself in the last night, what if still watching you waiting for you turn your back and join the pile of lifeless corpses, the day is still alive better take the gun with you the next time you leave the door or “El Chupacbra” may think of going for something bigger.

The legend of this fearsome beast is one that goes back to 1995 where the first case of this monster was found in Puerto Rico where events and witnesses stated to have to see a shadow attacking on domesticated animals such as goats and sheep which was not typically enough to make a myth until the report when further to find that the animals attacked by this monster left a pile of dead uneaten carcasses with all the blood drain out of the domesticated animals. The Chupacabra was than place in as a “vampire” in the bestiary of bloodsucking creatures. When asked about these creatures by witnesses it was said that they looked like a large reptilian kangaroo with huge red eyes but who truly knows if this monster is real or not with the fact that no pictures of this creature were ever taken, but only the words of others and drained lifeless bodies of where these monsters walk.